This book underlines the importance of consistent training and habits to allow the training to stick. A great read.

When one of my EVERFIT athletes bought this book in for me to read I was excited. I already had an enthralling book on the go, but having two to swap between really enhances my reading learning. I find so many commonalities with solid gems of wisdom even with completely different subjects. The story is penned by an Irish jounalist Adharanand Finn who traveled over with his young family to learn the secret behind the Kenyan dominance in almost every distance of running event from 800m to the marathon. This story was shortlisted for the William Hill Sports Book of the Year, and is simply "captivating".  So did he discover the secrets of the fastest people on earth?

One of the first questions he asked some of the British athletes over training in Kenya was what was the biggest difference between the Kenyans training methods and their own. "Rest" they all said.  In the UK when athletes are not running they go shopping, and meet up with friends. In Kenya they take the rest between sessions more seriously. Lornah Kiplagat (winner of World X country 2006-7, and World Half marathon champs 2008) famously sleeps up to 16 hours a day. Much like Roger Federar when he is deep in tennis training and in in tournament mode. The research backs the power of sleep up with countless papers, and TED talks backing the restorative and performance properties of getting enough sleep and rest. This allows the system to absorb the training. Check out my article on sleep (https://everfit.co.nz/articles/wholistic-runner-part-2-sleep)

Brother Colm - the famous teacher and coach that has helped transform Kenyan running into the powerhouse that it is today; also talks about a simpler more intuitive approach to training. "In the west we break it all down and analyse EVERYTHING......but sometimes by doing that you lose the bigger picture." The Kenyans wear watches but they don't use them for analyse; they tend to be more in the moment and run by feel. If you ask a Kenyan what was happening in his head during a race they will usually say something simple like - " I felt good so I ran faster", many western runners in contrast will be able to tell you what their thoughts were at each mile. It's a simpler approach. He also added something else to the conversation. Most runners come from a poor rural background "I have yet to meet a good runner from the city." The life of the rural poor in Kenya is tough. From a young age they have to work hard, they run or walk everywhere. It's the perfect lifestyle groundwork for an endurance athlete. By the time a Kenyan is 16 years of age - he/she has built the endurance platform.
"You people come to find the secret, but you know what the secret is? That you think there's a secret. There is no secret." Brother Colm

Daniel Komen (World record holder for the 3000m - watch the race on You Tube - 7min 20sec!!) stated - "In the west we have a good quality of life, no? But if you think about what quality of life means, it means less fatigue, making things easier. Running on the other hand, is about how much fatigue can you handle."

The diet of the Kenyans is again very simple, if you speak in macro language it's very high in carbohydrate, and low in fat. Beans, rice, ugali (polenta starchy like substance made from flour), and green vegetables are stable. Only occasionally the runners will have meat or milk - these are very much treats rather than stables like they are in the west. In Iten it was very hard to find take away fare, and very hard to get hold of highly processed food. There was a story recounted in the book that talked about some German scientists that wanted to study the Kenyan physiology to unearth the "secrets". After 2 weeks of being based in Germany the Kenyan subjects had put on an average of 5kg! The author after living in the Kenyan environment had lost 8kg. Check out what Alex Hutchinson states about the importance of a plant based diet compared to a high fat diet that is very popular at present https://everfit.co.nz/articles/alex-hutchinson-on-keto-low-carb-high-fat-eating)

It takes a village to raise a child but the Kenyans show that is can take a village to raise a runner. they are bought up as part of a wider community, almost like pieces of a chain. They soon learn about the tradition of "Harambee" in which the whole community will band together to help itself. It literally means "all pull together".

Another gem I got our of this book was that when we are hurting our minds naturally try to slow us down as a self preserving measure. To overcome this we have to tap into something bigger than the hurt and allow the body to flow. Paula Radcliff when hurting would chant her love for her daughter over and over again. This worked well for her, and the author of this book also managed to put that "hack" to distract the brain away from pain during a race.
As Arisotle stated many lifetimes ago. The sum of the parts is greater than the whole. What makes the Kenyans run fast? It's not down to one thing, it's everything. The tough, active childhood with barefoot play, the role models, the simple diet and approach to training, the desire to succeed and change their lives through running, the camps, the rest, and the reverence for running.

So how did Adharanand Finn go in races after his 6 months living like a Kenyan? He dropped his 10km time to 35min 50sec and he ran the New York marathon in 2hrs 55min. What I take out of this book is that you don't kneed to move to Kenya to run fast. Change your environment to align your habits to your goals. It's always an inside game first. 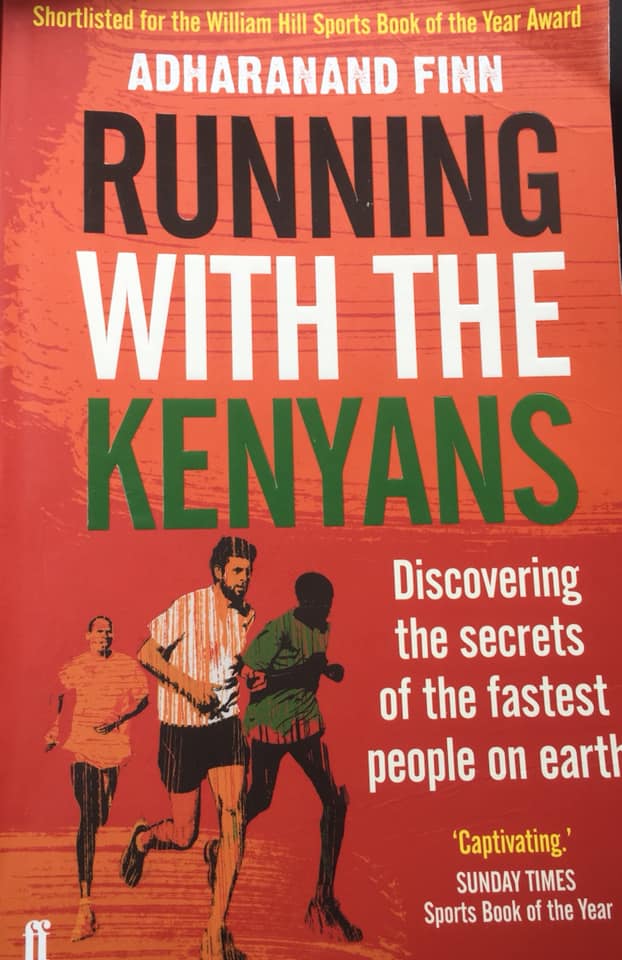