Save the whales - Save the ocean - Save ourselves

Our ocean is systematically being destroyed by our way of life. We need to drastically change the way we interact with our ocean.

Our current lifestyles are at war with our ocean. The ocean provides between 70-80% of our oxygen - if we win the war we will wipe out human kind. We simply can’t live with a Dead Sea. Seaspiracy was a frightening watch. The following is some of the hard hitting information from the Netflix documentary that should challenge the way we interact with our ocean and the life it holds and preserves.

Commercial or industrial fishing is 'wild life poaching' on a massive scale. We catch 2.7 trillion fish a year - 5 million sentient creatures are killed every minute. Our oceans will be basically empty by 2048. There will be far more plastic than fish by weight - commercial fishing will collapse long before with the current rates of extraction.

Fish are a vital part of the ocean ecosystem. Their presence has a multitude of benefits. The power of the sea life moving throughout the ocean is as powerful as the wind, tides, and currents. Take away the fish then you negatively effect the physics, biology, and the actual life force of the sea. Planting trees is great but a healthy ocean is the biggest carbon sink on the planet and is the largest pillar for life.  Marine plants absorb 20 X more carbon than the worlds forests. and 93% of all CO2 is stored in the ocean.

We need to LEAVE THE OCEAN ALONE - it’s our life support system. We are systematically disabling it by treating it as a bottomless pantry and a trash dump.  We don't need to eat fish. Just because something is possible does not make it beneficial; and just because it's always been done this way is not a license to blindly continue. Humans do not require fish, in fact consuming fish is fast becoming a health risk with heavy metals and other environmental toxins contained in the flesh.  We don’t need to eat fish as part of a healthy diet. If you stop eating fish you will reduce your toxic heavy metal mercury, and lead consumption - as well as Dioxins and PCB’s (polychlorinated biphenyls) and other persistent organic pollutants. The aquatic food chain is the most concentrated source of industrial pollutants. The bigger the fish the more bioaccumulatation of toxicity. These contaminants can outweigh the benefits of the nutrients. The other uncomfortable fact to consider is fish are sentient creatures, that is they have the capacity to suffer fear, pain or distress as well as a sense of wellbeing. Evidence that fish are sentient has been sufficient to achieve international recognition that their welfare matters.

Every year 25 million acres of forest is lost but this is a drop in the ocean (excuse the pun) compared to bottom trawling - this horrific practice wipes out 3.9 billion acres of sea floor yearly -over 4000 rugby fields EVERY minute. Large extraction of wildlife is not sustainable- ‘sustainable’  it is just a label to promote products to consumers and make them feel good while they are funding the problem. There are 4.6 million commercial fishing boats in the world. Long line fishing lays enough line to wrap 500 x around the planet DAILY. Enforcing sustainability regulations is impossible. Sustainability labels obscure the real truth.

Environment groups are SILENT on this issue due to funding from corporates  with interests in commercial fishing. The Marine stewardship council, a world organisation on sustainable fishing is funded by Unilever - which is involved in the commercial fishing industry. We need 30% of oceans protected, and only 1% is protected and that protection doesn’t go far enough. Some of these protected zones won't allow kayaking but still allow fishing.

Eating fish (especially from commercial fishing ships) contributes to killing sharks, dolphins, contributing to the destruction of our ocean. Sharks are apex predators- without them the imbalance destroys the oceans food chains. Blue fin tuna and some species of sharks have declined by over 95%. Sea bird by almost 70%.  Sharks kill 10 people a year - we kill 10,000-30,000 sharks an HOUR - half are killed as by-catch from commercial fishing then discarded as waste. 50 million a year as by-catch alone. 40% of ALL marine life caught is thrown back overboard as by-catch. 10,000 dolphins are caught as by-catch along the west coast of France alone every year. 300,000 whales and dolphins are killed yearly on earth as by-catch. 6 out of 7 sea turtles species are threatened due to commercial fishing NOT plastic straws. 250,000 sea turtles are caught, injured, or killled in the USA alone. Plastic straws only account for 0.03% of plastic entering the ocean. Discarded Fishing gear/nets makes up 46% of all plastic waste in the ocean.

Commercial fishing is the number one cause of ocean ecosystem destruction. In 1830 a fishing boat could take 1-2 tonnes of halibut per day in the North Sea - today the entire fleet takes 1-2 tonnes over the entire year. Halibut are 1000 x less abundant than in the 1800’s.

The flow on negative effects of dwindling fish is far reaching and catastrophic. Less fish stocks in Africa for example is causing more hunting of wild animals and bush meat consumption contributes to zoonotic diseases like Ebola and covid -19. 90% of coral reefs will die by 2050. The lack of fish is the number one cause of coral death.

The single best thing we can do to ensure the ocean is healthy and thriving is to stop taking as many fish from the ocean. This will not happen overnight, fishing is an important part of the fabric in so many societies around the globe, but continuing the path we are on is madness, a crime against wisdom. Please look at ways we can promote protection of our oceans - it could be as simple as taking fish off your plate. 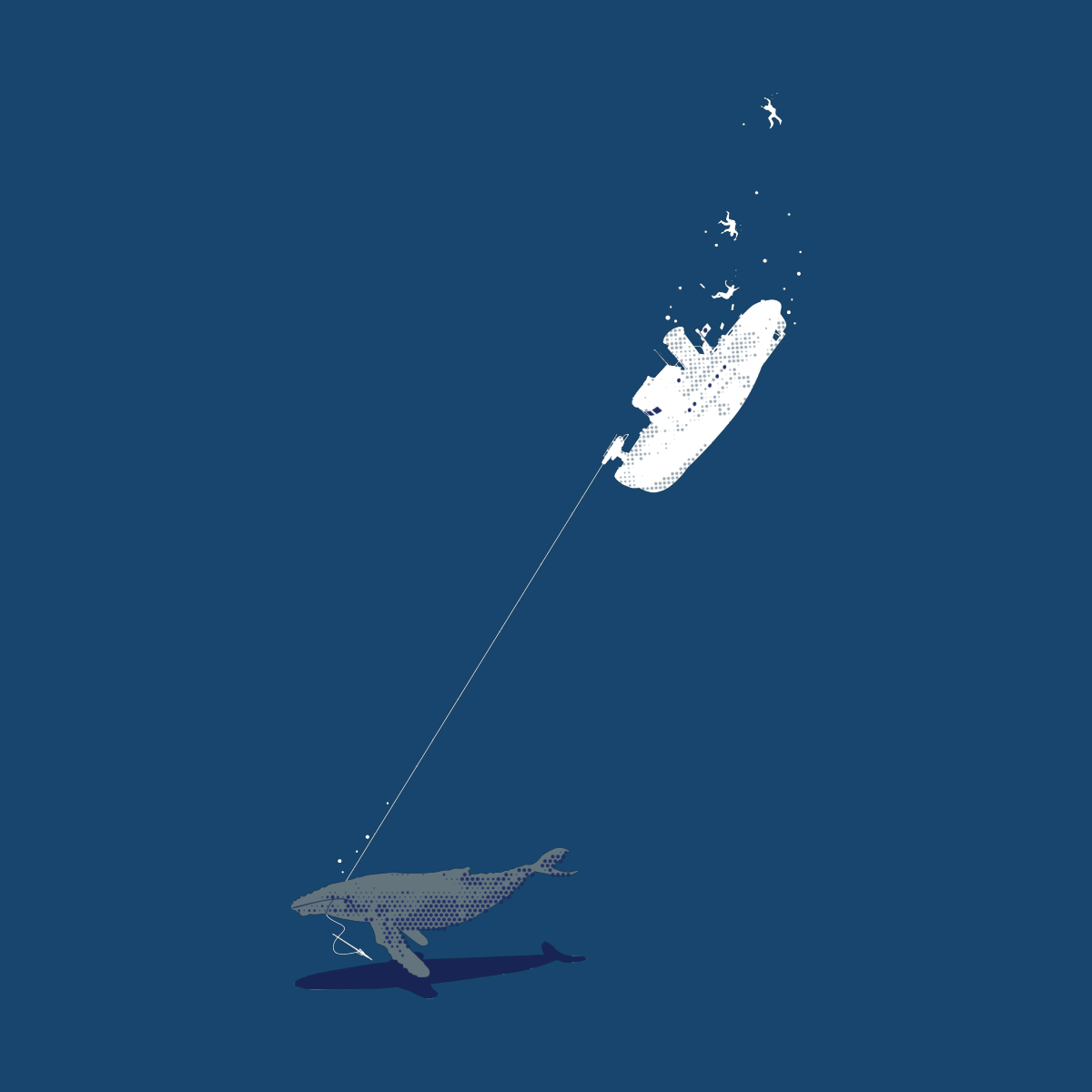 Karma - Threadless T-shirt design by my brother Clayton Dixon
Back