The continuing discord, with sparks of violence within this small portion of land between the Mediterranean Sea and the River Jordan has wide ranging implications for the world. I wanted to present an unbiased article with a brief history of the ongoing conflict - ending with simple steps for peace.

It may be true that that latest conflict was started by Hamas - but it must be noted that it did so in response to evicting Palestinians at Sheikh Jarrah with a 'land grab', in conjunction with provocations at al-Aksa Mosque; this is all on top of decades of humiliation.  Many people around the world wrongly believe the conflict is solely regarding religious lines, when its mainly about territory and the inability for groups of people to get along in a civil manner. While religion is in-tangled with the disagreement; the conflict, when broken down is about two groups of people with disputes over the same stretch of land.

The region along the Eastern Mediterranean we now call Israel-Palestine was under Ottoman rule for century's before the First World War (The Ottomans captured Palestine in 1516, ruled it until Egypt took it in 1832, in 1840 the UK intervened and returned the region to the Ottomans). The people lived in relative peace and were from different religious groups (Muslim, Christian, and some Jews). Around this time many Arabs started to develop a distinct national Palestinian identity and Jews offshore were getting involved in a Zionist movement calling for land to create a nation of their own - they believed Judaism wasn't just a religion but a nationality. From 1880 to 1910 tens of thousands of Jews moved to Palestine which started to create tension.

After World War 1 the Ottomen empire collapsed and the British and French carved up the Middle East region.  The British mandate for Palestine was created between 1920 and 1922, and approved by the League of Nations. This created political, administrative, and economic conditions that would facilitate independent rule of the communities under British control.  As more Jews moved to the region tensions arose with the established Arabs, the British then limited immigration but this created Jewish militant groups that fought with local Arabs and resisted the British rule.

The Holocaust during World War two forced more Jews to flee Europe and move to Palestine. The plight of the Jews galvanised the world to create a Jewish state. As the violence grew the UN proposed to divide the area into two separate states - one for Jews - Israel, and one for Arabs - Palestine. Jerusalem where Jews, Christians, and Muslims all have holy sites became a special international zone. The Jews accepted this plan and declared Israel as an independent state in 1947. The rest of the nations in the middle east didn't appreciate the world meddling in the affairs of the area and taking more land so declared a war. The Arab-Israel war (1948-49) resulted in an Israeli victory and they pushed past the UN established borders gaining MORE land than was in the UN plan. This created a negative flow on effect with many Arabs becoming refugees into other nations. Now Israel controlled most of the land except Gaza (controlled by Egypt) and the West bank (controlled by Jordan).

The next significant event was the six day war in 1967 in which Israel took over even more land with their very powerful US funded armed forces, including pushing into the Golan Heights in Syria, more territory in the West bank (from Jordan), and the entire Sinai peninsula. Israel were now responsible for governing the very people they were in conflict with.

In 1978 the Camp David accords were signed. Israel gave Sinai back to Egypt as part of the peace treaty but still controlled the West bank and Gaza.  Israelis started moving into these once Palestinian territories due to cheaper housing and other political and religious reasons. These settlers made their homes in Gaza and the West bank and several hundred thousand of the settlers remain to this day in the West Bank.  This is where the struggle became a Palestine -  Israel struggle. The PLO (Palestine Liberation Organization - established in 1964 with the purpose of liberation of Palestine) gained more power after the Camp David accords and fought the Israel rule with acts of terrorism.  Tensions simmered until the first Intifada (uprising) in 1987-1993. It started as protests but soon became violent. Israel responded with heavy force. Over a thousand Palestinians died in the first Intifada. Out of this conflict Hamas (Palestinian Sunni-Islamic fundamentalist group founded in 1987) was born. A group of Palestinians grew tired of the PLO. They thought they were too weak and didn't represent the peoples views so the more violent and direct political group was born. Hamas has a social service wing, Dawah, and the military wing, Izz ad-Din al-Qassam Brigades. Out of constant persecution, sanctions, and frustration with pointless negotiations Hamas reflected many Palestinians desperation, dedicating it's main objective to 'destroy Israel'.

In 1993 more peace protocols with attempted with the Oslo accords - this gave the Palestinian people some self rule in certain regions but hard line groups from both sides opposed the accords. The result was suicide bombers, and the Israeli prime minister (Rabin) was assassinated by a hard line Jewish student at a rally. The extremists on both sides were using violence to derail the peace process. They want to keep conflict going as they seek total destruction of the other side with no hope of compromise. Peace takes time to construct and is fragile and precious. Violence sparks in an instant and undermines the peace process.

The camp David summit in 2000 couldn't create a peace deal and the Palestinian people rose up in a second Infiada lasting years (2000-2005) resulting in over 1000 Israeli deaths while 3200 Palestinian's perished. This created more hardened hearts - Israelis didn't believe that Palestinians were ever going to accept peace so the politics shifted far right, walls were built, checkpoints controlled movement of the Palestinian's which created more despair, tension, and a lack of hope that the Palestenian people could ever live independently in their own land.  Israel didn't want to solve a conflict as it had become to complex, they just wanted to manage it. In 2005 Israelis move out of Gaza, Hamas took over and separated from the PLO run West bank. Israel then barricaded up the Gaza strip and put up constraining blockades creating unemployment and even more tension in this already pressure cooker environment.

This situation can't continue and peaceful resolutions must be found for the sake of regional, and world stability. More importantly the children in the area deserve stability and safety. What role models of peace and compassion can the children look up to if the adults are continuing to act with hard hearts, and violence as means of communication?

Israeli Jews need to remember their history as a wandering people, spending time as slaves, without a homeland. Having some empathy for your Arab cousins, co-creating a more livable, less hostile existence for all will release the tension that has been building since 1910. Continued oppression creates more hard line groups, and disenfranchised people with little hope. A lack of hope spills over into violence which destroys the prospect of peace for all in the area. "Love thy neighbour as yourself"  The love of peace, and the pursuit of peace is one of the key principles of Jewish law. The Israeli prime minister does not support a two state solution, and all his actions and words destroy this basic first step to resolving the conflict. This in turn strengthens the hard line Hamas group.

Arab Palestinians need to remember that Islam is a religion based on peace. "You may fight in the cause of God against those that attack you but do not aggress. God does not love the aggressors." (2:190). Islam is derived from Arabic root "Salema" meaning peace, security, and well-being. Aggression will not further the path to peace. Peace will give security, and well-being to all.  Hamas the political and social party that represents the Palestinian people is hard wired for war - wanting to wipe Israel off the map creates tension with the Israeli people escalating their defensive war like mind set. This in turn allows the right wing hard line politicians to keep Israel entrenched in their non-compassionate actions.

The world needs BIG examples of peace and compassion. What bigger example of humans getting along than lasting peace in one of the most volatile stretches of land on earth. If you are indeed acting with love and compassion then you need to turn away from the unsustainability of a society that oppresses groups due to differences. Justice is an essential part of societal stability. We are all one; part of a bigger family, and deserve to be treated as you yourself would want to be treated. Violence must be quelled if peace is to be given a chance. Britain created peace in Northern Ireland even when it was deemed impossible. The extreme leaders of Hamas and the leader of Israel Netanyahu are moving their people in the wrong direction. As Rumi said 'The middle path is the way to wisdom'. Compromise meshed with empathy is the only way forward.  The time for apportioning blame is gone, it's time to resolve differences and strive for peace with the same effort that the leadership are using for war. The children deserve better. 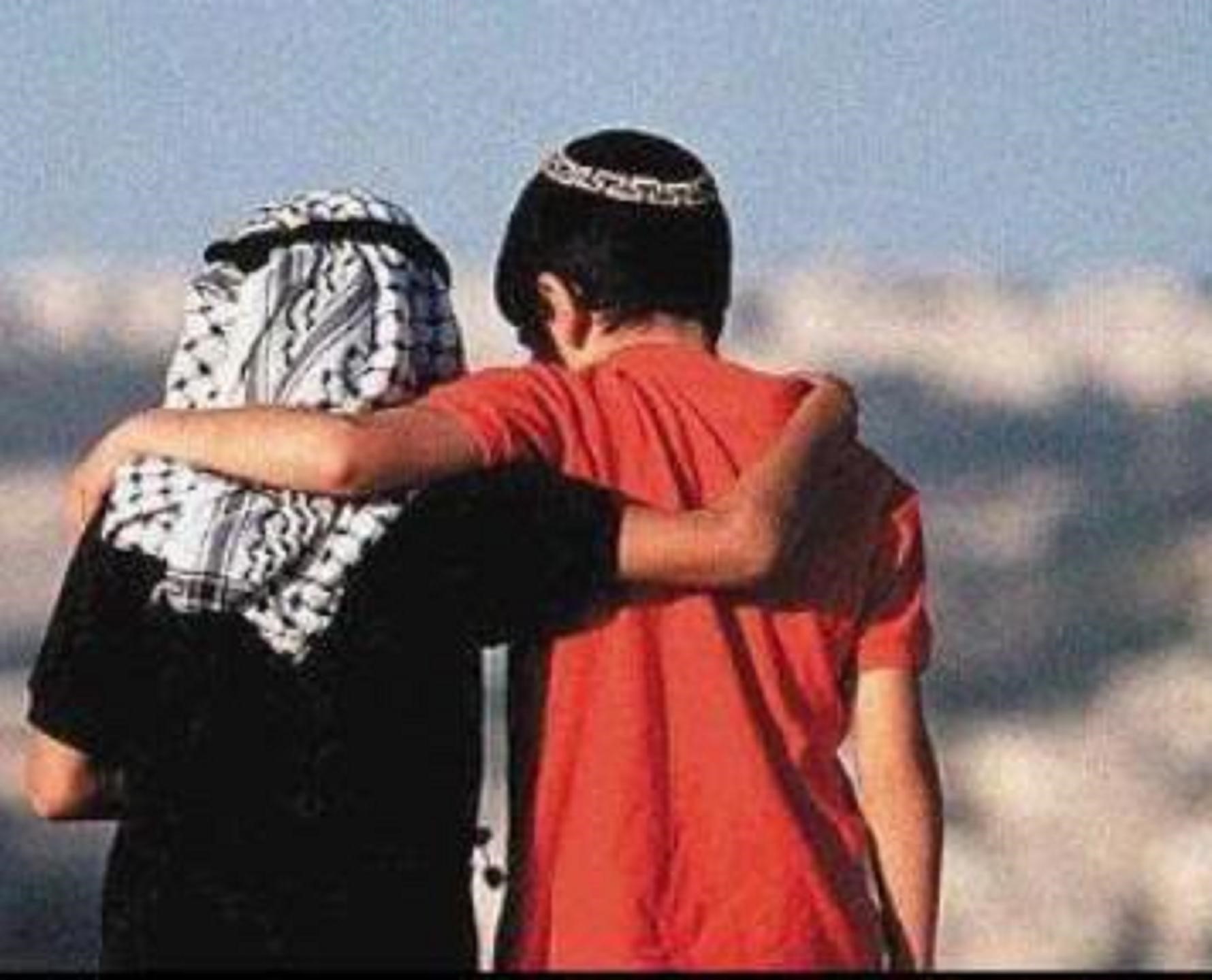