The Cure for Procrastination

The War of Art by Steven Pressfield is described by Esquire as "A vital gem....a kick in the arse." I totally agree.

If you want a push to do the work that you were put on earth for? If so read this book! The following is my review and notes directly from the book.

One of my friends correctly said - 'it’s less of a book and more of a manifesto'. This little creative enhancement tool is split into 4 sections. The first defines our common enemy of creativity - RESISTANCE. The destructive force inside human nature that pops up whenever we consider a tough, long-term course of action that might do for us or others that's good. Pressfield then goes through the many forms that resistance takes in our lives in the form of self sabotage, self-deception, and self-corruption. Writers know it as a block.

The second section is about Turning Pro and putting in the graft. He talks about seeking help as "useful" but in reality the work has to come from YOU. The professional focuses on mastery of the craft. Athletes get out and train when they don't feel like it. Writers sit down to write when they would rather be doing a thousand other things. The campaign of the professional is preparation, order, patience, endurance, acting in the face of fear and failure - no excuses, no bullshit.

The third section is titled 'The Higher Realm". In Pressfields words "When we sit down each day and do OUR WORK, power concentrates around us...we become like a magnitized rod that attracts iron filings. Ideas come. Insights accrete." The flashes of creative genius (read on later for the true meaning of genius) seem to come out of the blue, they spring forth from the unconscious mind. They were there all along - they came into the world with us and we were born to bring them into fruition. When you put time in to the work you were meant to do - you are fulfilling true purpose. This is the cornerstone to living a purpose driven life that you were created for.  What stops us from doing the work? RESISTANCE.

Resistance is the most toxic force on the planet. Procrastination is the most common manifestation of resistance. I'll do it tomorrow. This can become a dangerous habit.  To yield to it deforms our spirit and prevents us from achieving the life God intended when we were endowed with our own unique genius. Genius is a Latin word - the Romans used it to denote an inner spirit, holy, and inviolable that internally guides us to our calling. We ALL operate from this sacred center. How many of us have become ill, addicts, succumbed to painkillers, gossip, compulsive cell phone use because WE DON'T DO THE THING THATS IN OUR HEARTS, OUR INNER GENIUS, IS CALLING US TO??

Resistance can't be seen, heard, touched, or smelt - it is felt. It's a repelling negative force that distracts us from doing our work. What elicits resistance? Any act that rejects immediate gratification in favour of long term growth, health, or integrity. Any act that derives from our higher nature instead of our lower. It is the enemy within. The more important a call or action is to our souls evolution, the more resistance we will feel toward pursuing it. It kicks in when we pursue a calling in the arts, launch an innovative enterprise, or evolve to a higher station morally, ethically, or spiritually.

"The Warrior and the artist live by the same code of necessity, which dictates that the battle must be fought anew every day."

A professional dedicated to his craft will not tolerate "soap operas" in their lives as it prevents them from doing the work.  Sometimes entire families participate unconsciously in a culture of self dramatisation to create short term scandal, providing short term gratification that prevents any work, growth, or energy to strive. Casting yourself as a victim is the antithesis of doing your work. DON'T DO IT. The professional has learned that success, like happiness, comes as a by-product of work. Resistance knows that the more psychic energy we expend dredging and re-dredging the tired, boring injustices of our personal lives, the less energy we have to do our work. Resistance hates it when we turn pro. The amateur has not mastered the technique of his art, and they don't expose themselves to judgement in the real world. Nothing is as empowering as real world validation, even if it's failure and rejection. Evolution has programmed us to feel rejection in our guts - this is how the tribe enforced obedience by wielding the threat of expulsion. The fear of rejection isn't just psychological; it biological, it's in our cellular make up.  Resistance uses rejection to paralyze us. Editors and critics are not the enemy; in fact the professional lends an ear to criticism in order to learn and grow. The battle is our own. We must be prepared each day to confront our own self-sabotage because we want to be in possession of the full arsenal of skills when inspiration does come.

I enjoyed Pressfields take on fundamentalism. He states that to combat sin i.e Resistance,  a fundamentalist will either plunge into action or into the study of sacred texts. They can become lost in these. It's important to look forward in the hope of creating a better world - rather than look back seeking to return to a purer world from which all have fallen. The humanist believes that humankind are called as individuals and communities to co-create the world with God. Things should progress, we should evolve; each of us has potential value in advancing the goal of saving the world - wasn't this why Jesus was sent? When fundamentalism wins the world will enter a dark age. Criticism and cruelty harm others. When we see others starting to live their authentic selves it can drive us crazy if we have not yet lived out our own.

"It is one thing to study war and another to live a warriors life." Telamon of Arcadia, 5th C B.C

The most important thing about your craft is to work. Nothing else matters except sitting down every day and trying. When we invest time in our craft unseen forces enlist in our cause; serendipity reinforces our purpose. Pressfield believes that the entire human race has a super angel over it crying - Evolve! Evolve!. Unfortunately most are deaf to the call.  We are too distracted by our own nonsense. This prevents us from living out the destiny encoded in our soul, our daimon, our genius.

"Whatever you can do, or dream you can do, begin it. Boldness has genius, magic, and power in it. Begin it now." W.H Murray, The Scottish Himalayan Expedition

The Ego (as Jung tells us) is that part of our psyche that we think of as "I". Our conscious intelligence, the everyday brain that runs our everyday lives in the real world. But there are other worlds other than the real world.  The self is a greater entity which includes the ego and the personal + collective unconscious. This is where dreams and intuitions come from. Think of it as the sphere of the soul. When we learn we may die many contend the seat of our consciousness shifts from the ego to the self.  Superficial concerns fall away and are replaced by a deeper, more profoundly grounded perspective. There is a battle going on as the Ego likes things to be the same and the Self wishes to evolve. Pressfield talks about the slang terms society uses for intoxication - stoned, hammered, smashed; they are so demolition orientated. It's us blasting the ego, we try to demolish the ego to get to the self. When we deliberately alter our consciousness we are trying to find the self. The self is our deepest being, our soul. The ego hates the prophet and the visionary because they propel the race upward. The ego hated Socrates, Jesus, Luther, Galileo, and Martin Luther King. The ego produces the resistance.

If we embrace our ideals we must prove worthy of them - this scares us. What will become of us? We will lose friends and family, who will no longer recognise us. Yes - we will lose friends but we will find friends in places we never thought to look. They will be good and true friends.

The EGO believes
The SELF believes

The world demands us to be hacks - when the hack sits down to work they don't ask what's within the heart to profess to the world, they ask what is the market looking for? Krishna instructed Arjuna that we have a right to our labour but not to the fruits. We must work for it's own sake, not for fortune, attention, or applause. Many people of faith (from Christian, Islam, Jew to Hindu) believe you should do the work for God. "Give the act to me, purged of hope and ego, fix your attention on the soul. Act and do for me." To work in this way, The Bhagavad-Gita and the Bible tells us is a form of meditation and spiritual devotion. We are put on earth to act as agents of the Infinite, to bring into existence that which is not yet, but which will be through us. 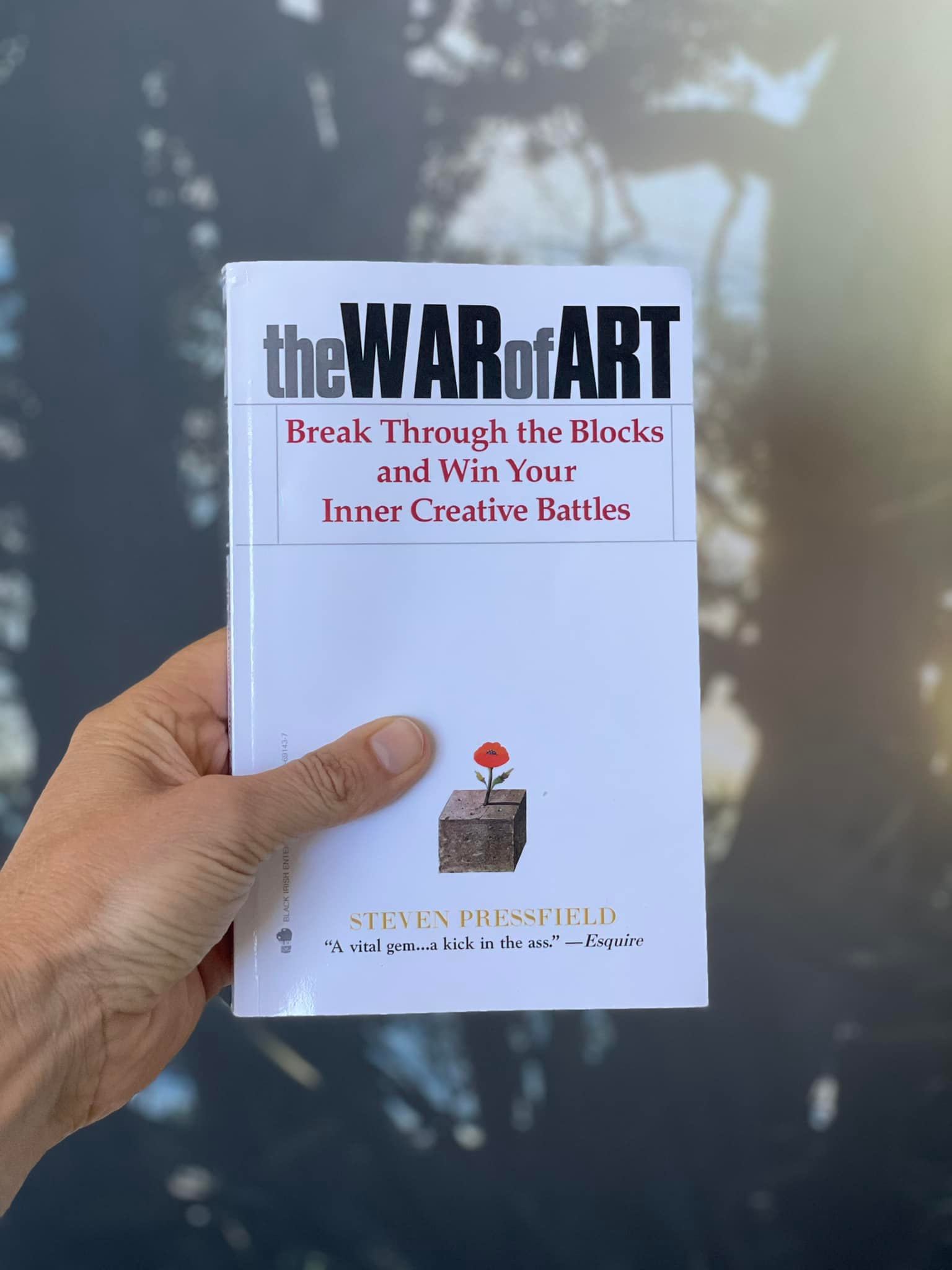