This is Everfit athlete Mike Riddles account of his North - South Kaimai 85km trail run. A great account with a gear and nutrition list at the end.

I had been planning on attempting the North South track for a while. Initially mid-April was my aim
but weather/family commitments scuppered those plans. The next date of 28 may was set but
getting to the week before the 14 th it was now or never. My father was going to drop me at the
south end at the SH 29 summit and pick me up at Karangahake the next day but he was struck down with illness. There was no going back, so I drove myself to the start point, pick up logistics to be confirmed.

As my estimated time was 20 hours I didn’t rush and set off at 9am. There is a short climb for a start then on to flat/ undulating ground on good tracks including well formed former tram tracks. Three deer were seen within the first couple of hours, all in poor condition. Apparently, the dry conditions have taken their toll on the population. First stop was at the newish hut where Ngamuwahine is marked on the map. Its very well set up with solar power and a good fire. 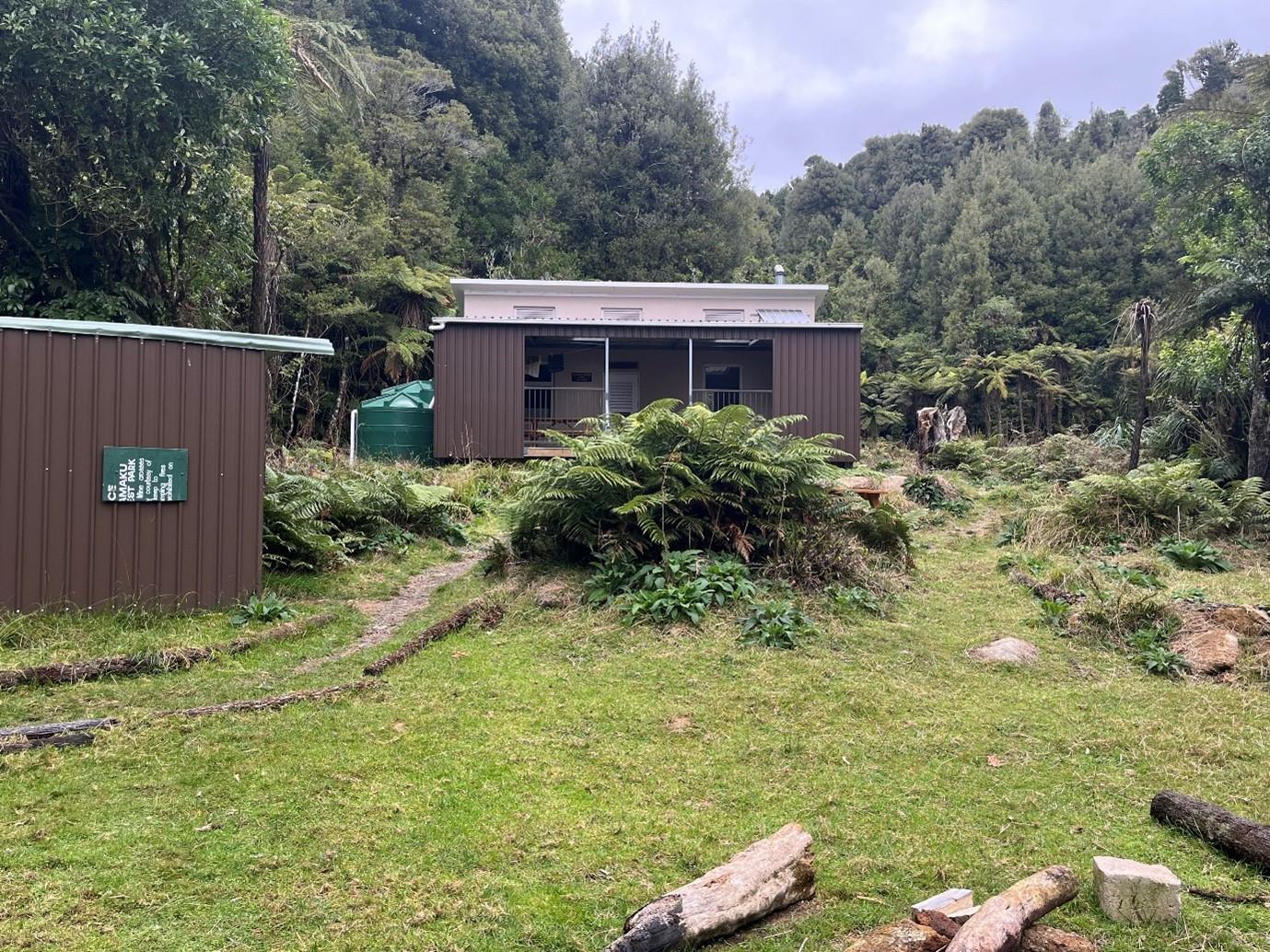 I saw the first hiking group not long after, boy scouts heading for this hut. Throughout the run, every hut was at capacity. It’s great to see them being so well used, but if planning on staying in one on the way be prepared that there may not be a spare bunk.

Running conditions were great, crossing Te Tuhi track, and a left/right on Wairere track on mostly
easy country. From here was the decent to the Aongatete Stream, upland road area, up and over
into the Kauritatahi Stream. This area was challenging, with lots of stream crossings, some pretty
slippery, and steep climbs on tracks that are not well maintained or marked. I think this would have been hard work in the dark. 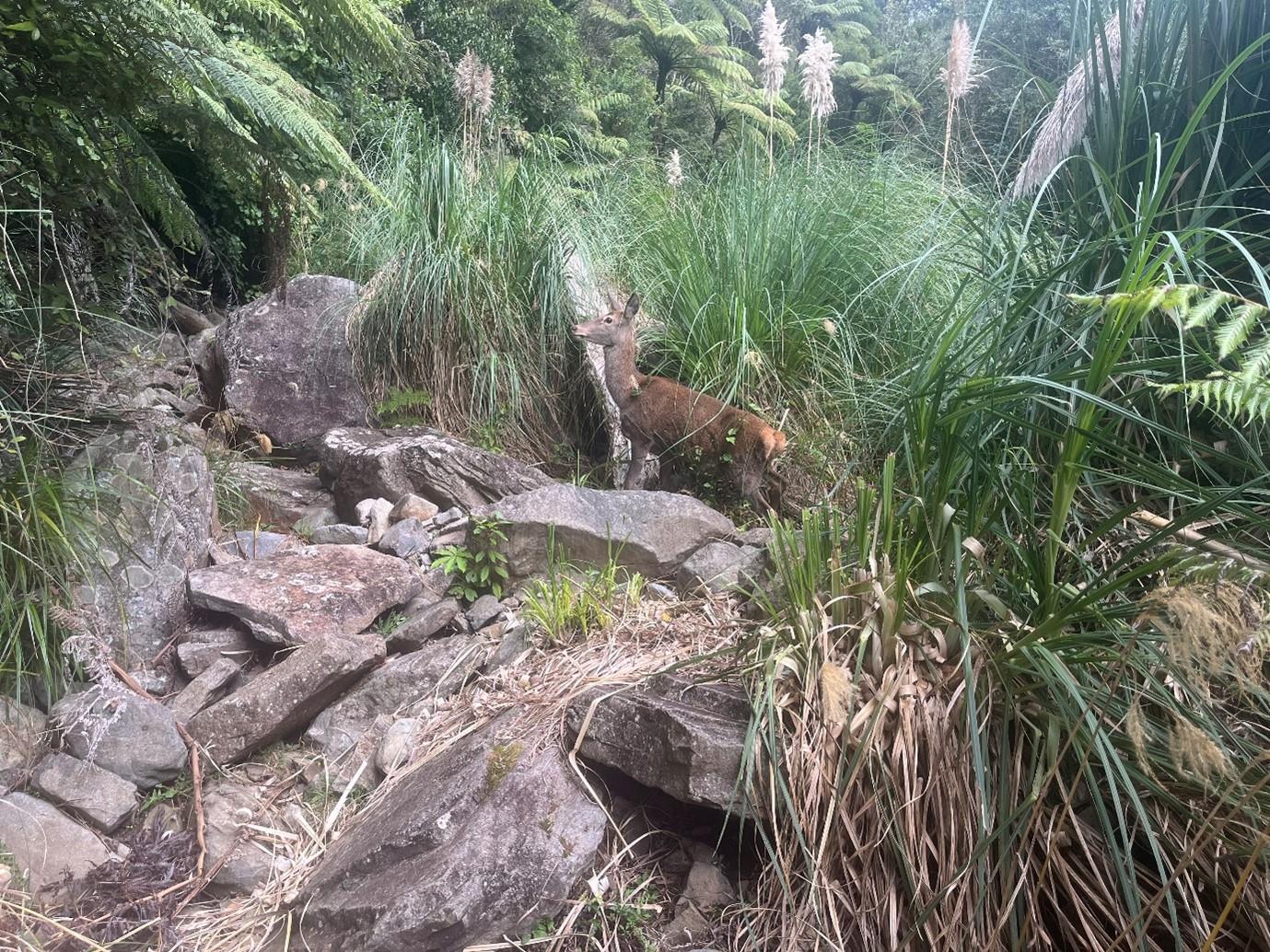 This hind in the Kauritatahi Stream was pretty tame and didn’t seem too concerned about me.
After climbing back up to the ridge it was a right turn to follow along to Thompsons track which was quite busy with 4WDers. It was quite confusing to find the track at this point. I had to use Topo gps to get back on track after a bit of a detour. After crossing all the clearings, it was back into the bush and a slight detour off the route to Motutapere hut for a break just on dark. Here I cooked up a dehydrated chickpea curry which was a mistake. I struggled to keep it down. From here it was headlamp on and out into the dark and windy ridge conditions. 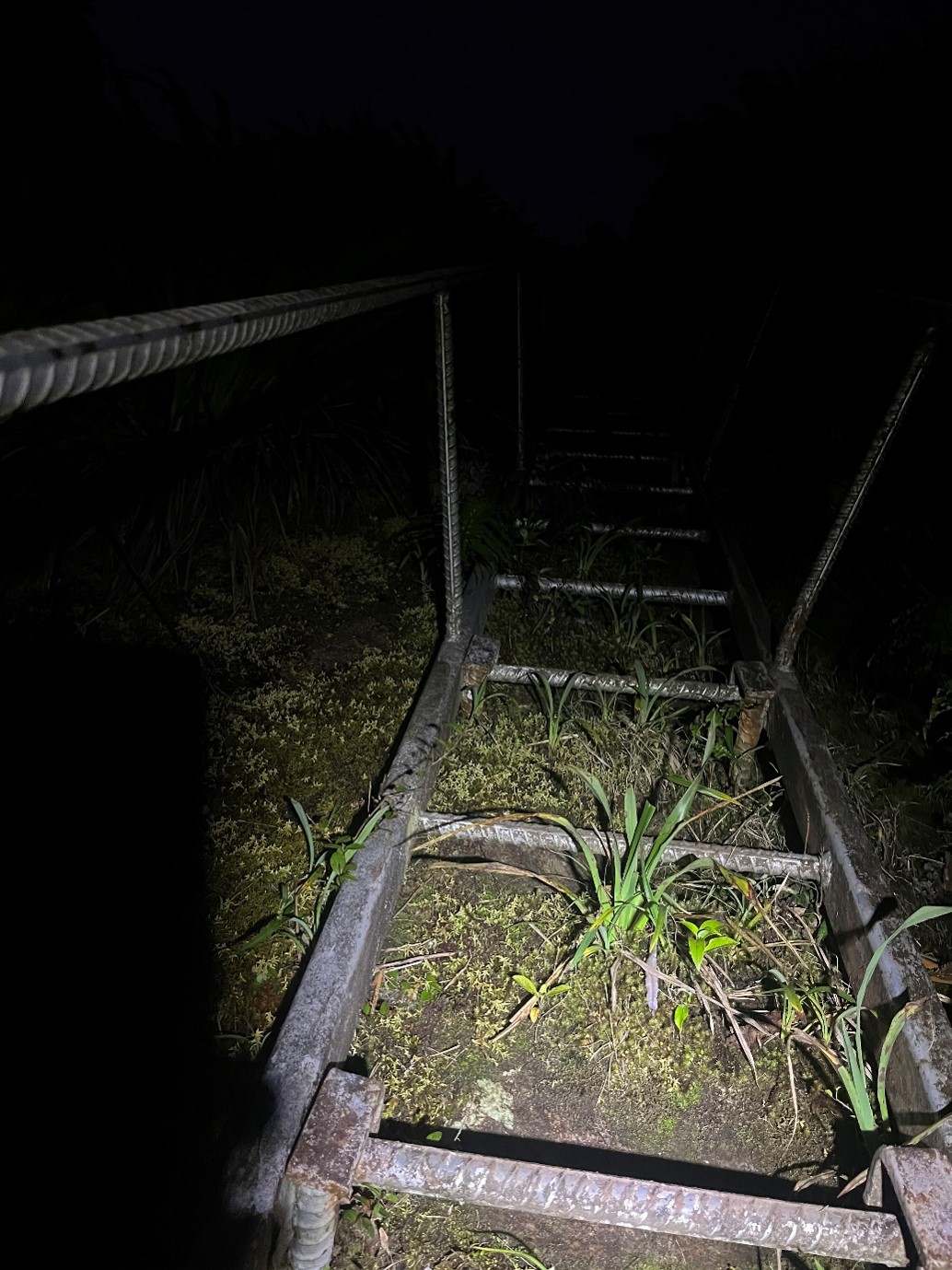 This was the most rugged part of the trail with rocky exposed areas and the infamous ladder. Its pretty much vertical up an exposed rock face. Once through here it was down to Te Rereatukahia hut, which was full, warm and a welcome break from the cold windy conditions outside. A cup of hot water did wonders to settle my stomach. By this time, it was around 8.30pm but I was feeling pretty good. The decent down Wharawhara track to Wharawhara Stream was steep but dry. Up the Wharawhara Stream, short climb to Cashmore clearing and down into the head of the Waitawheta River was uneventful. I bypassed Waitawheta hut due to the time of night. The Waitawheta River track follows an old tram track, complete with original sleeps with rail spikes protruding, and base rocks, which made for uncomfortable running conditions. There was one big river crossing, and the rest were swing bridges.

A left turn took me up to Dalys clearing hut then a right turn on to the track to Dickeys flat. There
were two substantial river crossings. One thing to note here is that the exits on the far side don’t
have reflectorized markers so it was hard to find the track again. Topo GPS came in handy again.
After navigating through Dickeys flat, the swing bridge to the Waitawheta pipeline walk was shut off due to track maintenance lower down. At 1am, this was a bit disappointing! So a short backtrack onto the Dubbo track with more climbing, then down into Karangahake gorge carpark at 2.30am . Here I cooked up a dehydrated creamed rice which was just the best thing ever and crawled into my emergency bivy for a sleep. I wouldn’t want to rely on these if your life depended on it. It condensated inside, and when the rain started it was quite cold. Dad picked me up at 6am with a very welcome cup of tea and dropped me back at the south end.

In the bottles I used 2 scoops of tailwind, Mandarin (non-caffeinated) in one, and Berry(caffeinated ) in the other. I took spare powder and used about 3 bottles of each.

I used plain water in the bladder and went through 2 fills.