Every coach has a slightly different running training philosophy. It's important to be aware of the various systems that have evolved over time but not be fixated on any particular one.

I love reading how the best coaches and athletes in the world structure their training. What I've come to understand is there is not a 'one size fits all' approach. I use Bruce Lee's advice "Listen to all but follow no one". As soon as you become fixated on one methodology, or system, with any pursuit in life you diminish the opportunity to experiment with other methods, or try something completely different. Below is a rough time line on how training has evolved.

700 BC - Greeks. Throughout history the Greeks placed great value on physical conditioning. The inaugural Olympic games were organised in 776 BC. All male citizens were encouraged to take part. Universal participation was the goal but overall performance was celebrated (we need this ethos with our sporting landscape). Being the best you can be was of the utmost importance to the Greeks. Their word for this was 'aristeia' which translates as bestness or personal excellence. So you participated and gave your best effort.  The Greeks believed that physical strength was the soul manifested through the body - thus having a strong body allowed the soul to manifest action. In 560 BC a race was created called the hippios (there and back and there and back). This was a foot race over 800m. Later the races included running in battle armor with additional weight of up to 30kg (possibly a precursor to Emil Zatopek's wife carrying for strength). The Greeks understood that having their society strong and fit with excellent stamina helped with battle readiness and holistic wellness. This branched into places of learning. It was at these centres that male residents (In the Greek city state of Sparta - there was more equality and women were every bit as valued, repsected, and valued as men) were indoctrinated into the blend of intellectual and physical education. They were considered inseparable - both needed for a citizen to develop into a contributing member of society. Imagine the money NZ could save if we had this ethos? I'm sure we could reduce our almost $20 billion spent annually on health.

1600-1800’s - run/walk long distances at a steady pace. Similar philosophy to the Maffetone method (MAF), which is keeping sessions controlled at a heart rate below the general formula of 180 - an individuals age (give or take 5 beats either way depending on athletic history and injuries). Foot races were common over large distances between servants of the British gentry. Even before this time there are numerous reports of long distance messengers in ancient Greek times running hundreds of miles over a few days.

Early 1900’s -  Finnish. The great Runner Paavo Nurmi with his coach Lauri Pihkala devised interval training - fast running reps with short easy jogs inbetween. These reps were completed as well as longer runs. These methods were very successful with Nurmi being the only man in history to hold the mile, 5000m, and 10,000m record simultaneously. He broke 22 world records in his career. The Finns had something they referred to as 'Sisu'. This word doesn't have a direct translation into English but is a combination of commitment, stubborness,, fearlessness, and a willingness to risk and endure pain.

1930’s - Swedish - The Swedish coach Gosta Holma tweaked the Finns rep training and made it less standardised. A runner would alternate pace depending on how they feel. This play on the intervals was given the name ‘speed play’ or Fartlek.

1950’s - Zatopek -  Emil Zatopek took the interval concept to the extremes. He ran very high volumes of high intensity speed work. For example 60 X 400m. It was reported that he did sessions wearing army boots or even carrying his wife for extra strength work.  His running form was ugly. One journalist described it ‘like a man wrestling with an octopus on a conveyor belt’. The Czech locamotive, as he was known as won three gold medals at the 1952 Helsinki Olympics in the 5000, 10000m , and the marathon (at his first attempt at the distance). This will never be repeated.

1950-1960’s - Arthur Lydiard reverses Nurmi’s structure by making his runners train a huge base of miles before doing speed work. Hill work, bounding, and speed work (specific to upcoming event) was introduced only when the base phase was complete. This type of structure is very popular today especially with NZ coached.

During the same era as Lydiard the eccentric Australian coach Percy Cerutty moulded Stoic and Spartan teachings together. The home spun system was called 'Stotan' training, embracing a holistic regime of natural diet, and hard training in natural surroundings, with mental training. He was obsessed with run form (ensuring running economy), with hill work and sand dune running. As a young triathlete I did alot of sand dune running under John Hellemans in the early 1990's. Cerutty also talked about the need for a strong trunk (modern day core strength). Some of his methods were strange (no need for warm up for instance) but his runners broke 30 world records.

1980-2000's - Bob Larsen.Larsen was the US endurance running coach and coached Meb Keflezighi to an Olympic silver medal in the marathon (2004) and 4th place at the 2012 games. He has been called  the greatest distance running guru of all time.  Bob's secret sauce was a mixture of endurance and tempo speed work. Altitude training was very important to his training groups. He preached 5 fundamental ingredients of a training regimen 1) Basic speed and power - 60-400m reps (intervals of 60-200m were all out sprints, 300-400m starting at half marathon race pace and get faster) 2) Threshold runs - 85-87% of threshold for 20-80min. 3) LSD runs - 30min - 3hrs 70-80% of HR measured at threshold pace (average for max pace held for hour). These were always negitively split, so started at 70% and end at around 80%. 4) Mid range intervals 800m, 1000m, 1600m, 2 and 3km repeats, 2min rest inbetween (3min at altitude). These increase fat metabolism, and speed up production of aerobic enzymes that help muscles utilise glucose, and they produce additional capillaries and mitochondria  5) RECOVERY - runs - nothing like following up a morning workout with a 45-80min run at 30% of max HR, nice and easy.

Modern day methods honed by the East Africans is a combination of all the previous methods and their home grown philosophy. Large miles on dirt tracks in groups. Simple living (after a training run Mutai returned to his one bed cottage, drew water from the well in a bucket, washed himself in cold water) sleep, simple food, with a little gym/strength work thrown in. Most believe they get conditioned by running big miles. More of the Kenyans are starting to put more specific strength work into their routines to help decrease the chance of injury. Zane Robertson who has lived the Kenyan way for over 10 years (Current NZ marathon record holder) completes strength training and some cycling in his weekly training especially when he has to deload due to niggles.

What is EVERFIT's running system? Anything from all of these systems that works for the individual. What ever sessions excites the athlete, helps bring joy, and most of all blends in with life to create growth and a positive stress. What we must remember is that most of these systems are created for professional athletes with extra time in their day to rest and absorb the training. There is NO secret to getting better as an endurance athlete. Just be consistent - increase load gradually (duration, frequency, and intensity) leading up to an event or tick over with WELLNESS as the goal - have a rest/de-load/absorption week every 4 weeks - Meditate/downshift - cross train/don't just run - work on full body strength - eat plant centric whole food - sleep well - live with purpose - train with awesome buddies -  and be joyful!

"It is the brain, not the heart or lungs, that is the critical organ." Roger Bannister (Miler. Neurologist)

Check out my book 'Holistic Human' for more information on Expansive Wellness habits.

Photo taken at the top of the Mt. Maunganui with my training buddies, Adam and Andy. 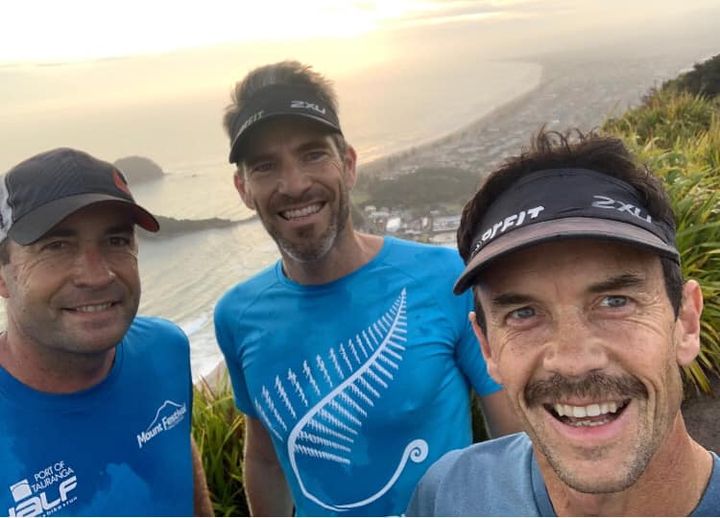